Yesterday, British prime minister Theresa May gave a speech that set out the post-Brexit government’s worldview—and it was strikingly isolationist. She singled out foreigners, “citizens of the world,” business fat cats, and—by implication—young people, who had voted overwhelmingly in the Brexit referendum for the cosmopolitanism and free movement that EU membership bestowed.

The previous day, home secretary Amber Rudd had proposed forcing companies to disclose how many workers they employ, and announced restrictions on international student and work visas. It’s not just political rhetoric either: after the referendum the rate of reported hate crimes shot up and a month ago was still above the previous year’s level.

But today, it so happens, is Britain’s National Poetry Day. And people who opposed Brexit and are dismayed by the anti-foreign rhetoric have been sharing poems on Twitter to express their feelings. 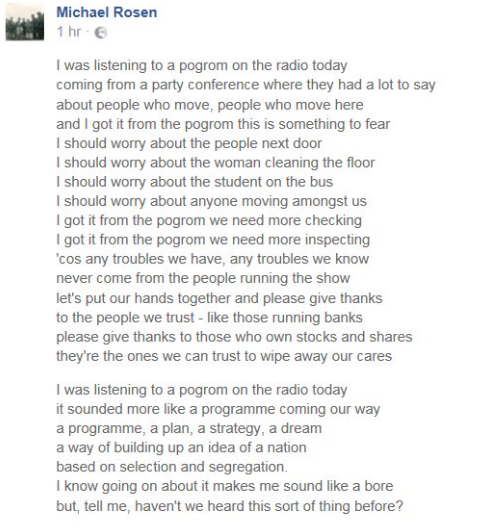