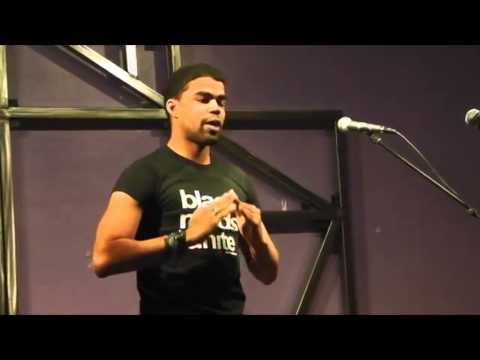 We had the wonderful pleasure of interviewing poet and new author, Julian Randall! He spoke with us about his recently released book of poetry, “On The Way Here,” as well as his involvement within the spoken word community. Check out the conversation, below. We’re sure you’ll appreciate both his amazing talent and spirit!

What impact has your involvement with the spoken word community had on you?

It may come off as corny but I think the most significant part of it really is the community. Being part of a bunch of different spoken word communities from my PYPM family—who have really made life in Philly so great for me—to everybody I’ve met through CUPSI, has just given me an amazing base of beautiful people who can’t wait to introduce me to more beautiful people and opportunities. You just run into them everywhere, on any day of the week, and suddenly you’re inspired to make something new or you find an opportunity that changes everything.

For instance: by chance, during CUPSI in 2013, my team was in the same building as First Wave’s team and because of that I found [out about] the Hip Hop in the Heartland conference which changed my entire career path in about a week. Spoken word communities give you chances. Just a massive family of chances to make the world in general and the world you live in every day a better place.

How long have you been writing and when did you decide to start performing?

I guess the story to that [started] towards the end of my freshman fall semester of college. I’d followed my best friend, Noel Quinones, to an open mic at the college where Jamaal V. May was performing along with a bunch of my friends. I saw all these people who I already knew outside of poetry and thought, “Well, damn. Maybe I could do that too.” And I’ve been at it ever since.

Do you write for the stage or for the page? Was it always that way?

I honestly find the whole stage-page binary to be a false one that was invented to try and make it seem like slam poets weren’t poets. They’re all just different forms. I write for smart people who want to take in the stories I have to tell and the politics that I bring to them.
Which of your compositions is your favorite and why?
Oof, tough question. I think probably Old Spice Man still gets the edge (though I love all my poems. Read: babies). The reasoning being that the story of how that poem came to be is still funny to me and reassures me that even the smallest events have purpose. Old Spice Man actually started because I made an Old Spice Man video for my senior year prom date (luckily she said yes). Noel found it and I jokingly said, “Maybe I should do a persona piece as the Old Spice Man.” But he actually refused to let the idea go and a month later the poem came out. Ever since, I honestly just have [had] such a great time performing it and waiting for those moments where the audience starts to realize what’s really going on in the Old Spice Man’s head. A really dear friend and phenomenal writer once told me [that] it’s one of her favorite poems ever and that was also pretty cool. Haha.
Have any of your personal beliefs or opinions shifted over time?

I don’t know if it is that [or if I’ve just] changed my mentality about what exactly I feel comfortable putting out there. For a long time, I mostly kept my personal stuff on the page and only shared pieces about other things. Eventually a lot of poets who are also really amazing friends of mine just kept asking me to write about myself because the audience was “falling in love with someone they know almost nothing about.” Since then I’ve been working to put out more stuff about who I am and what I’m actually like.

How personal is your poetry?

I forget who I was talking with this about but ever since I started writing personal pieces (a lot of that work got done out in London), the personal poems have come in floods. It’s been really cathartic because there was a lot that I hadn’t realized was bothering me or weighing me down until I was in London and away from almost everything I had ever known and I could really see what I had been living every day. It really gave me the perspective to start finding language for some of them.

On the Book
You are preparing to release your poetry book, On the Way Here. First of all—congratulations! When did you decide to publish?

Thanks so much! It’s been a really wild journey towards publication at 2Rise, but I got to actually hold my book for the first time the other day and I was genuinely speechless. I started getting the idea to publish a book around October a year ago so I put a bunch of my favorite poems into a folder marked “Book thing” and have been frantically organizing about it ever since.

How many poems are included? Did you write these pieces specifically for the book or did you pull from your past work?

There are 23 poems in the book and they’re all past works from the last three years! I’m really excited for people to see some of the work that hasn’t necessarily been on my YouTube page or been that widely circulated!

Does this collection have a theme? (Feel free to elaborate on the book!)

I would say that the theme is really a “coming of place” type of story; I’ve lived in a lot of places. My experiences in those places—and never quite feeling at home anywhere besides Chicago—has made a strong imprint on the work that I put out and who I am as a person. So many of the poems deal with that, with the people I’ve met along the way, with my family… all the things that have brought me to where I am right now.

Can you discuss your release party?

The release party was amazing and I could not have been more happy and humbled to have so many people there! I decided to have it at Swarthmore College’s Black Cultural Center because this book is a kind of homecoming and where better to release than in the place I first performed? …The essential beginning of this journey!

How can people purchase your book?

They can head over to my publisher’s website and order there!

We know that you are a Chicago native. Which aspects of your city have molded you as a person?

I suppose just living in Chicago with all the rich, complex history it brings changed me a lot, molded me. But I think having to move away at the end of 9th grade from the only place that had ever felt like home was a big turning point for me. Everything I do is about finding a way back to that kind of bone deep purposefulness that I only feel in Chicago.

What are some of the topics that you are most passionate about (even if you’ve never written about them)?

I write a lot about race which I suppose makes sense because I very consciously live the realities of it every day regardless of where I am. But also because I am a black studies major so the topic of minorities in art is especially important to me! I’m also a really passionate Chicago sports fan!

Other than poetry, what are some of your interests (music, theater, sports, etc.)?

I am a huge nerd for TV shows. I speak almost exclusively in quotes or allusions to scenes from shows that I love! There are way too many to list here but I will say that I believe The Sopranos was the best show that has ever been made and I will go to war with anybody about it! I also am a die-hard Bears fan and believe football is the best sport in the world. I’m loving a bunch of the music that is coming out of the Chicago renaissance right now, so I’ve been very deep in that recently!
What has been the greatest piece of advice you’ve received thus far (poetry related or other)?

“Be honest. Go hard. Go as hard as you possibly can on this performance, this shit is bigger than tonight. We have YouTube now, so your piece could change the life of some kid in Sri Lanka. You need to go HAM because he needs to hear you.”—Perry “Vision” Divirgilio (right before finals to make the Swarthmore CUPSI team)

What is your ultimate goal—with regards to your career or life in general?

At the end of it all I hope that my art has helped people; that it was something honest and beautiful and something that they needed to hear or read or share with others. I dream one day of winning a Pulitzer and I have a goal to win an NAACP Image award by age 35, so hopefully that comes to pass. But the most important thing for me is to constantly be producing new and necessary work because that is what makes my life worth living to me!
Twitter: https://twitter.com/JulianThePoet