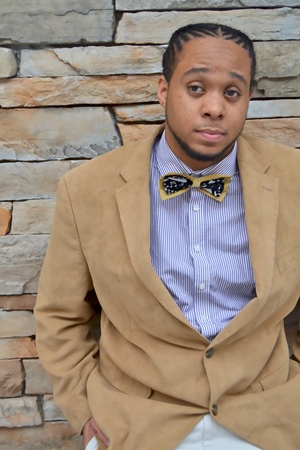 Lyrical Forte is a spoken word artist and host of the online radio show, Mic Nice. We were so intrigued with his involvement in the poetry world that we just had to chat with him. Check out what he had to say about Mic Nice, the late Dr. Maya Angelou, his very first performance and his passion!

How did the idea for Mic Nice come about and when did the program first air?

I am actually the successor to the online radio show, Mic Nice. The show was first aired on February 18th, 2011 by a mentor of mine, Simply Tam. She launched the show after being a part of several online cyphers in written format. Mic Nice was a platform to help and inspire poets and spoken word artist to step up their lyrics and elevate their mentality. It was also [an attempt] to contribute to others through the art form of spoken word poetry. It gives spoken word/poetry lovers an opportunity to listen in as well. It was a platform that I found out about through social media.

I was asked to guest host the show on March 29, 2012. I went on the air having no clue on how things would go or what to actually say. I just was humbled and appreciative of the opportunity to host. As soon as the show started, I loved every minute of it. I just went with the flow and tried to make it as natural as possible. Simply Tam commended me for accepting the challenge and was pleased with my performance on air. She said hosting came natural to me. In May of 2012, I co-hosted every other week with Simply. July 5 2012, I became the host of Mic Nice exclusively.

Can you explain the format? Has it changed over time?

Mic Nice brings a variety of programming every week. It spotlights the best of Spoken Word/Poetry through conscious music, guest hosts, special interviews, discussions, interactive chat and more. Every Thursday at 6pm CST, listeners can listen in to the show via phone or website. Listeners who would like to share a poem or join in discussion may do so my calling in and pressing 1 when prompted.

After taking a 10 month hiatus from the show, I relaunched the show on May 1st, 2014. For the most part, I have stuck with the original format while also adding my own sort of twist to it as it grows. I am more conscious of what is being put out on the show and have made it a format in which ages 13 and older can be a part of and contribute to the show. We look to have more programming for young adults, bring live video streaming capabilities, tours and much more as a part of the show soon.

How did you decide upon the name?

I am not for sure how the name came about. I knew that I loved it and couldn’t change it.

What has been the most challenging aspect of organizing/launching this show?

For me, the most challenging aspect is being consistent. As a person with many interest and talents, I have a lot of ideas and things I want to pursue. I want the show to continue to grow. As we move forward, I do not want the show to become stagnant at all.

Have there been any moments, thus far, that have moved you in particular?

There has definitely been several moments on the show that have moved me. Honestly, I don’t think there is a week that goes by that someone on the show hasn’t said something that makes me realize what the show is all about. Many people utilize this platform as a way of getting things of their chest. Some use it as a way to fuel their passion for different causes and situations. Even just by listening, you can hear the passion. Words are powerful.

You are a poet yourself. When did you first start writing and how long have you been performing?

I believe I really grew a desire to write poetry earlier on in high school. I had a English teacher in the 11th grade that really allowed the class to express themselves. I knew a couple of people who did spoken word. I loved the flow of the words and the story behind them. I would watch YouTube videos of Spoken Word including Def Poetry Jam for hours. It wasn’t until my freshman year of college in November of 2009 when I put together my first piece. I saw a sign about an Open Mic and came up with my first spoken word piece called A Young Man’s Optimism. To this day, I have never written it down. I memorized it in my head and embedded it in my heart.

I went to the open mic and signed my name up. There were about 50 or so people in the room at this time. The size of the audience grew in the auditorium until there was standing room only. I performed in front of a crowd of 700 or so people. It was so nervous. The worst thing that I thought could happen was me forgetting the poem that I hadn’t written down, but only memorized. The MC announced my name wrong. It had me all distracted along with those who knew me and were saying my name. Not to mention, I almost tripped and fell going up the steps to the stage. The whole auditorium roared with laughter. At that moment, most of the butterflies and nervousness left my body. When I said my first sentence on the mic, the laughter died down and had the audience was captivated throughout my entire piece. At the end, the crowd gave me a standing ovation. It was one of the best feelings I have ever had. I knew it was something I wanted to continue to do. Plus, no one remembered me tripping going on stage.

How did you come up with your name?

When I was trying to come up with a name, I was hearing the word, Forte, being thrown around a lot for some reason. I was really good with words and lyrics. I combined the two to become Lyrical Forte. It was Godsent.

What separates you from other poets?

Hmmm. That’s kind of a tough question. I believe there are many things that make me different from other poets. I’m building my own brand that allows me to use my passions in life to serve a purpose unselfishly. I don’t have fans. I have supporters. It’s not about me. We are all in this together. As I once heard a great poet, author and activist once say, I am still “en route” to separating myself from others as I grow and mature in my gift.

Which of your compositions is your favorite and why?

I don’t believe I have a favorite. All of my works serve a purpose for different reasons and situations. I can relate to them all. I am still working on writing one of the best poems ever written.

What has been the greatest piece of advice you’ve received thus far?

One of the greatest pieces of advice for me is to never allow myself to tailor the truth in order to please others. In other words, don’t get away from the truth because it might offend someone or they may not like it. If I did the opposite, it wouldn’t be truth. It wouldn’t be authentic. It wouldn’t be me.
We recently lost a phenomenal woman, powerful activist, and influential poet: Maya Angelou. Are there any thoughts you would like to share on either her legacy or the impact she’s had on you?

There is definitely a lot that I can say about Dr. Maya Angelou. She was so talented. I have always loved her work and words of wisdom. One would say she was before her time. She would be humbled and say that she was still in progress. Since her death, it has made me look even closer to the messages as well as the things she’s learned and shared with us. She has left such an impact on me not only as a poet, but as a person. Her words were vivid and her actions were compelling. She knew that the world was capable of change and growth. She knew that everyone has a purpose no matter what age, creed or color. I only hope to live a life as purposeful and leave a legacy as timeless as hers. She will forever be a part of the light that allows me to shine.

What is your ultimate goal—with regards to your career or life in general?

There are a lot of things that I aspire do. My ultimate goal is to continue to use my passions in life to fuel my God-given purpose.

In the next 10 years, what would you like to see happen in the poetry world?

I would like to see Spoken Word/Poetry go to even higher heights. I would like it to get more respect and recognition all across the board. I want to see it in every aspect possible. It is an art form that is certainly rising and not dying out. I am inspired and hopeful for this art form.